Captain America T Shirts: A look at Cap on cloth.

The primary goal of this here lil' website is to keep comic book fans informed of any progress or developments in the upcoming Captain America movie from Marvel Entertainment. However, that does not mean that I am only allowed to obsess on the future movie and nothing else; one such example of me veering away from the movie and looking at something else is the subject of this here post. I would like to share with you some interesting results from my trip around the interweb which I undertook because I was curious to see what different pieces of Captain America-related clothing were out there.

Of course most of what I found out there were short sleeved Captain America t shirts, but not quite everything. (of course it is the middle of Summer, so that is to be expected, I suppose) So without further ado I present to you a collection of images I like to call: Captain America on cloth...

This is an example of a more traditional Cap shirt; it displays the front flag image from Captain America's costume in the four-color style found in the comic medium. 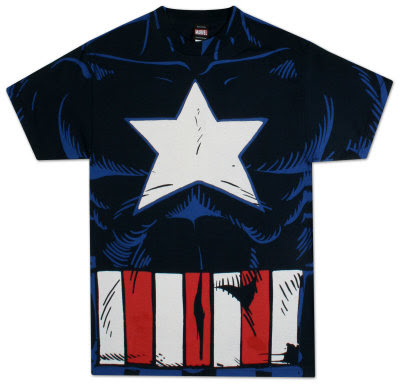 This shirt sports a more realistic or modern-looking depiction of the fron t of the costume, with darker colors and also includes faux muscular details in the design. 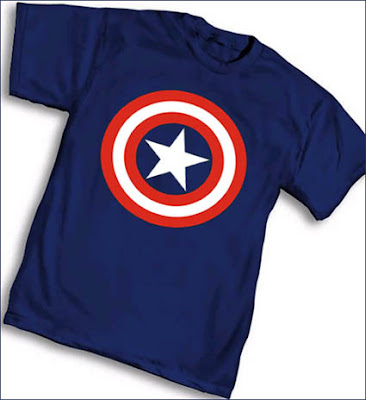 With this shirt we have a good example of the shield image that has been a popular logo choice at various times in the past and even now. 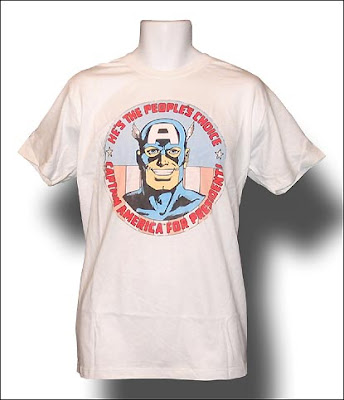 This one is interesting. I assume that the idea behind this shirt was to cash in on the buzz that was present during the last US Election, however I get a kick out of this shirt more because it is using an image of Cap from the 1980's John Byrne run on Captain America, which many fans of the book consider to be a modern highpoint of the series. 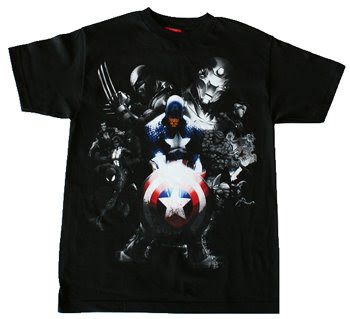 As any recent readers of Marvel comics would know, the events depicted in Marvel's Civil War series were the catalyst behind the recent death of the Steve Rogers/Captain America. this shirt is effective in highlighting Cap above all of the other characters depicted with the selective use of color. 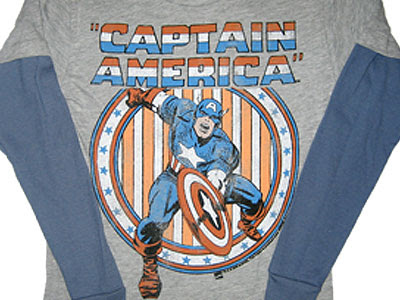 See, I told you that not all of the shirts I found were short sleeve t shirts. This one is cool in that it sports a very retro image of Captain America probably hearkening back to the 1960's era character. The grey sweat-shirt look of the shirt also gives it a bit of a retro feel, too.

As you can see, there are plenty of Captain America shirts to choose from when the big day comes and you find yourself trying to choose something special to wear to that first day screening of The First Avenger: Captain America, in 2011...

**EXTRA! EXTRA!**
I have had a few people asking  me where thwey can go to buy the shirts seen in this post; At thbis time, I am recommending people check out online retailers like superherostuff.com to find a decent selection of Captain America shirts.  Happy hunting!
Posted by Stephen at 9:00 PM