Chris Pine is in for Captain America Movie? Maybe, maybe not.

I have to say that I am not really a fan of posting about any and all rumors that might just possibly be true, hence my lack of regular posts on here regarding the latest names dropped in the rumour mill for who will play the lead in the future Captain America movie, however this latest one I chose not to ignore because it comes just before the casting is supposed to be finalized by the movie's director, Joe Johnston. Word on the internet is that actor Chris Pine (most recently seen as Captain James T. Kirk in the hugely successful franchise-reebooting Star Trek movie) is in negotiations with Marvel and Paramount to play the lead role of Steve Rogers/Captain America. Although this story has been reproiduced in many different places, it seems like it originally sprung forth from one initial report. We all know how shaky that can turn out to be.

Ironically,just as I might be offering up my own opinions about whether or not this would be a good pick for the role of the iconic super hero, I came across a report that seems pretty reliable that pretty much dismissed the Chris Pine rumours; website comicbookmovie.com posted some feedback from sources closer to Pine claiming that there has been no real offer from Marvel or Paramount for the part of Captain America in the movie. You can see their take on this here.  It is at this point that I also feel that I should apologiseif anyone else feels that this site is starting to feel just a little too much like another one of those run of the mill gossip blogs or another celebrity blog. lol
Posted by Stephen at 3:39 PM No comments:

So much Captain America Movie news to sift through (and a few dancing girls, too!)

Recently, we have started to hear a lot more with regards to the details surrounding the upcoming, The First Avenger: Captain America movie from Marvel. In fact we have started to really hear a lot about it, and soon enough we will be hearing more because the principal casting is (hopefully) going to be completed and announced to the World by the start of next month.(according to the movie's Director, Joe Johnston) Originally I had intended to update this here blog with seperate updates or posts with the requisite interview clips reproduced as the various bits and pieces were made available to us, however I think it might just be more prudent if I just put forth summaries of movie update info with less posts. (yes, I am lazy, but that is not the only reason for this decision, lol)


Another really cool piece of news (at least to me) is that we now pretty much know how they plan to justify the character's costume in the movie universe; according to Johnston, the costume will originally be introduced as the on-stage performing outfit worn by Cap during an initial point in the movie when he is used by the military as solely a USO performer to help boost troops moral overseas. The idea here is that the military is too afraid of losing their one of a kind super soldier (Cap) to enemy fire and so decide to relegate him to stage duty as a song and dance man. Seriously, I kid you not. Following with this idea, the first version of the costume will be a based on the original Jack Kirby design that was first seen in the comicbooks. After Cap abandons the USO tour the costume is expected to be transformed into a more realistically designed version of the flag-suit, such as that seen in the Marvel Ultimates universe.

So we could see a metamorphosis along thse lines: 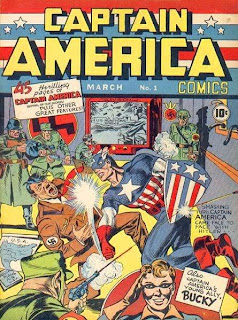 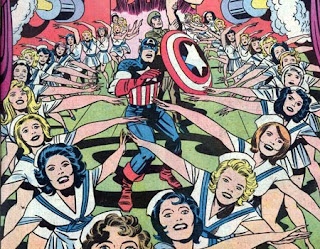 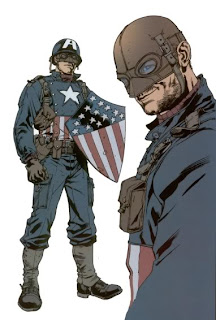 One last thing to pass along at this time is the fact that Johnston admitted that the WWII super-group, The Invaders could be a big part of the second half of the movie. Its interesting to see Marvel maintain this idea since that group was originally a creation of Roy Thomas during his time spent with Marvel in the Seventies which has been used effectively in recent storylines in the regular Captain America comic. If this indeed ends up being the case, it will be interesting to see if there is any similar retro feel to the use of these characters that I believe was present during some of the newsreel footage scenes of Watchmen.  With all of these costume possibilities floating around, it makes me wonder what we can expect to see down the road when the marketing storm that will be the Captain America movie touches down: will we see some retro Cap toys such as action figures or even bobbleheads adorned with several variations of the Cap costume we have come to know over the decades?

And Captain America will be played by...

Okay I am being a bit premature here. Honestly, there has been no announcement yet regarding who will be cast to play the iconic Marvel Super Hero, however we have just heard from the Captain America movie Director, Joe Johnston, how things are shaping up on the lead actor casting front. During the press junket to promote his most recent movie, The Wolfman, Johnston made some significant comments about where he is at in regards to casting an actor for the title role in the upcoming The First Avenger:Captain America:

"We need to cast it soon," Johnston said. "We have a very short list, but we're still juggling actors here. I'd say within the next couple of weeks we'll have ourselves a Captain America, I hope."

As for who will actually play Cap, Johnston either ain't saying or can't yet say. Rumored actors include everyone from Will Smith to Aaron Eckhart to John Barrowman.

As for when the movie will shoot? Johnston said the movier is still "fairly early" in preproduction. Shooting won't start until the end of June, he said, "but we're getting ready to go to the U.K., it looks like."

As for the story: "It's the kind of thing where, while I'm not necessarily a comic-book fan, I think the interesting thing about this guy is that he's a superhero without any superpowers, basically," the director told us exclusively while promoting his current film, The Wolfman. "He is the epitome of human perfection. He can't fly and throw tanks around and see through walls and things like that, but he's strong and runs fast."

Johnston added, "And the interesting thing about this guy is that he starts out as a 98-pound weakling and he becomes this Adonis. How does that affect his arc in the story? How does that affect where he goes and what happens to him and everything? I think that's the part of the story that was fascinating for me. And, of course, being a Marvel movie, there's fantastic action scenes in it and all kinds of great stuff. But there's an interesting story there as well." (courtesy of Scifiwire.com)

So, that is very interesting indeed. No name to drop yet but it sounds like it will be dropped soon. Pretty much the casting will be the next big event for many after the Winter Olympics, lol. Also interesting to think of some of the names that we have heard rumoured over the last 12 months or so; such actors as Will Smith, Leonardo DiCaprio, Aaron Eckhart, Sam Worthington and John Barrowman have all hadtheir names bandied about. Well, in a few weks this speculation will all be moot.
Posted by Stephen at 7:02 PM No comments: