The Captain America Movie: Casting Choices Have Been Made 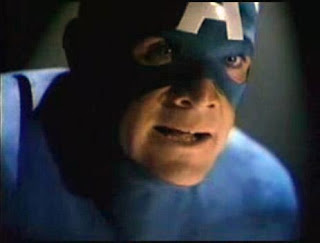 I guess my first thought here is directed towards anyone who arrived here looking for the latest news updates on the Captain America movie; if you are looking for news that is less than 24 hours old, you will most likely be dissapointed. lol

I don't have any insider friends in the movie industry, I don't have any movie insider friends on Twitter (in fact I don't even do the whole Twitter thing at the moment - I know I probably should, but I don't) and I don't have a website with a daily deadline for space to be filled, so to those of you wanting page-one-of-Google-breaking-news on the upcoming Cap flick, you must have already passed the turn-off if you ended up here. ;)

Okay, that was my attempt to explain why I have not yet posted about some of the most recent casting announcements for The First Avenger: Captain America. Time to address that, eh?

Sebastian Stan as Bucky. Okay, I hear he was in the runnng for the lead and obviously didnt get it, losing out to chris Evans, so maybe Marvel/Joe Johnston liked what he had to offer and wanted to keep him in the project? I have not seen his previous efforts ( Gossip Girl, Hot Tub Time Machine) but he will be in at least a couple of films before he is seen in the future Captain America movie ( The Apparition and Darren Aronofsky’s Black Swan with Natalie Portman ) so he will have some exposure by the time he appears as Bucky. Physically he looks okay for the part but ... isn't he abit old to play Bucky during WWII? I am assuming that he is in his twenties, and that the character he portrays in the Cap movie was in his late teens during the War. In the Sixties the Bucky character was retroactively killed off during WWII but recently Marvel brought back an older Bucky as the Winter Soldier (a brainwashed assassin for the KGB) so maybe they are casting with an eye ahead to future sequels which would require an older actor, but for this film it will be interesting to see how they justify having a Bucky not far off from Captain America in age. I will reserve judgement on this.

The other big casting announcement for the movie is of course the choice of Hugo Weaving for the role of the Red Skull. I love Weaving and think that he would be a very good fit for the role. I understand that we are still working with rumours about his signing on but it sounds like an almost done deal. I was at first concerned that he might have no original characters left in him, but realized that I probably don't need to worry. His adaptability as an actor could be key here; Weaving is use to portraying a character from behind a mask (V For Vendetta), supplying a voice for a CGI character (Transformers), while wearing minor prosthetics (Lord Of The Rings) and portraying coldly evil individuals(The Matrix), so what's to worry? Maybe just worry that he has not yet been completely confirmed as being cast yet? Well the movie starts filming in June, so we shall all know soon enough. Now I'm off to find something else to worry about...
Posted by Stephen at 11:59 AM